Mount Kilimanjaro can be climbed all year round. Generally, the main tourist seasons are from July to October, then from December to February. These months coincide with the dry season in Tanzania. Many people visit in December.

The shoulder seasons, marking the transition from wet to dry season and vice versa, can be the best times to visit, though climbers are taking a gamble. Because most people avoid the rains, it’s the only time climbers can experience both low crowds on the mountain and good weather.

The table below summarizes the weather, temperature, crowds and description for the corresponding months.

When Should I Climb Kilimanjaro?

For most people, it is July, August and September. The next tier of good months consists of October, January and February. These six months, plus December, are considered to be Kilimanjaro’s high season. The shoulder season months are December, March and June. Lastly, the rains come in April, May and November. These three months are considered to be Kilimanjaro’s low season, and many operators offer discounts during this time.

Climbing during the High Season. The greatest advantage of climbing at this time is that you can stay dry the entire time. Sure, you can always get rained on throughout the year, especially in the rain forest andmoorlands, but typically the precipitation is low and infrequent. By staying dry, you stay comfortable and the overall trek will be more enjoyable. Removing the stress of being wet and cold also increases you chance of proper acclimatization. In the dry season, the views are better, with clear and sunny skies. The disadvantage is that the trails have many climbers, which can take away from the feeling of being on a big, remote mountain. However, some visitors look foward to socializing with other groups at camp. Not surprisingly, most people choose to climb during the dry season because the likelihood of nice weather trumps any misgivings they may have about encountering others on the mountain. 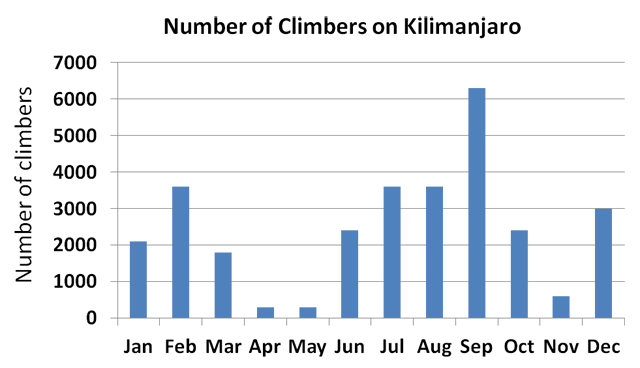 Climbing during the Low Season. The prospect of having the mountain to yourself is what draws people to climb during the low season. The mountain is very empty and it is possible to be the only party at a campsite. This quiet and solititude is what many people seek when going outdoors. Secondly, although it does rain quite a lot during the low season, most of the time the rains arrive in the afternoon. With Kilimanjaro’s trekking schedule, most of the hiking can be done in the mornings, which means that the time spent on trail while it rains can be minimalized. One thing people forget is that precipitation creates snow, which is not a bad thing. Kilimanjaro is best displayed during the rainy season. The most beautiful sights of the mountain often are enjoyed in the mornings after it snows.

No matter when you climb, you have the chance to see the night sky over the rift valley. Watch this awesome video with fireballs, shooting stars and lights above Mount Kilimanjaro!

DO YOU WANT TO CLIMB KILIMANJARO?

Ultimate Kilimanjaro® is the #1 guide service on Kilimanjaro, leading private climbs and group climbs all year round. Choose from seven routes and six trip lengths. With nearly a decade of experience, Ultimate Kilimanjaro® has a proven expertise on Mount Kilimanjaro, leading over 150 climbs per year, with more than 1,000 adventurers climbing with us annually. Literally thousands of climbers have stood on the top of Kilimanjaro with us. Our clients have included celebrities, film makers, senators, ambassadors, authors and journalists. Our expert guides are among the most talented and respected professionals in the industry.

For more information on when is the best time to climb Kilimanjaro, visit Ultimate Kilimanjaro®.